The rise in the use of Ad Blocker has seriously affected the online advertising ecosystem. AdBlock plus which is the most popular ad blocker on the web has been downloaded and is active over 100 million devices. Ad blocker is controversial because millions of websites, blogs on the internet depend only on revenue generated from the ads on their websites. So, the use of adblocker is dramatically affecting the way website owners are getting paid. One of the surveys conducted by the AdBlock plus indicates that only 25 percent of their users are strictly against all form of advertising whereas the other 75 percent are ready to accept advertising that does not affect their experience.

Marketers or advertisers are equally affected by the ad blocker. Ad blocker blocks ads as well as other things such as social media share buttons which are necessary to run successful marketing campaigns. Google in one of their blog post mentioned that they won’t charge the advertisers for the ad impressions that are not visible or viewed by the user, providing some respite for advertisers who otherwise lost revenue because of their ad being blocked and not displayed.

Pop-up ads and banner ads which once received a high click through rate (CTR) are viewed as distractions by the viewers and masses and are blocked by the ad blockers. As a result of all these, the marketers and advertisers are now turning to another form of online advertising called as Native advertising. According to the definition given by Google, native advertising is a material in an online publication which resembles the publication’s editorial content but is paid for by an advertiser and intended to promote the advertiser’s product. Native ads look and appear like the original content, and avoid getting blocked by Ad Blockers. Native ads are getting popular in recent years, but it will get even more popular if the use of ad blocker keeps on increasing, which is exactly what is happening right now.

Media brands such as Time Inc, Forbes, Wall Street Journal, New York Times, and The Guardian are using native or sponsored advertising on their online platforms. BuzzFeed is regarded as a leader in native advertising. They have created their entire business model on sponsored content and ditched the traditional banner advertising. According to a study by sharethrough.com, 25% more users looked at in-feed native ads than the normal banner ads.

Search engines and social media are incorporating native advertising that matches their UI to avoid distracting user experience. Instagram which is owned by Facebook and which shares the Facebook’s targeting system gives the online advertisers the opportunity to display their ads in visual form as carousel ads. Since the number of users using an ad blocker on mobile devices is comparatively lower than on desktop or laptops, ads in such apps currently provide a good chance for the brands to reach out to their customers. Facebook is also trying to make its ad preferences easier to use for their users, so they can stop seeing the ads they don’t like or don’t want to see.

Brands and companies are also creating branded content, where the brands create content for the publishers. The image below shows an example of branded content. In this example, Dell has paid and posted an article on New York Times, with indicators highlighting that it is a paid content. 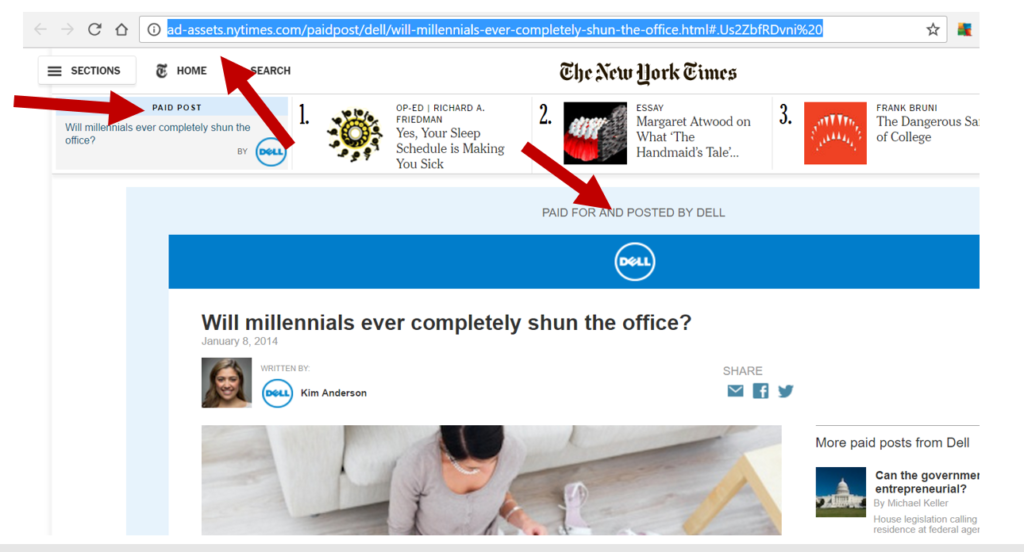 Brands can also consider the option of ads in emails as well as use platform such as LiveIntent. With Gmail ads, the advertisers are able to directly target users’ inbox with ads. And according to LiveIntent, their solution can improve performance up to 10 times with a higher standard of display advertising.

Interactive Advertising Bureau (IAB) introduced L.E.AN ads program in response to Ad Blocking. IAB has introduced such a program to address the issue for which the consumers turn to ad blocking. The L.E.A.N ads provide an alternative set of standards. They address the frequency of retargeting and ensure that the user is targeted appropriately. It also tried to improve the page loading time by not allowing to pre-load the ads when the ad units are not in view. They also try to get rid of ads such as flashy, blinking ads or video ads that autoplay when the page loads.

In response to ad blocker, some publishers have started using solutions that bypass the ad blocker and displays the ads. Adrecover is one such solution which lets the content creators or the publishers monetize the users using adblocker. Below is an image of the ads displayed through Ad Recover. 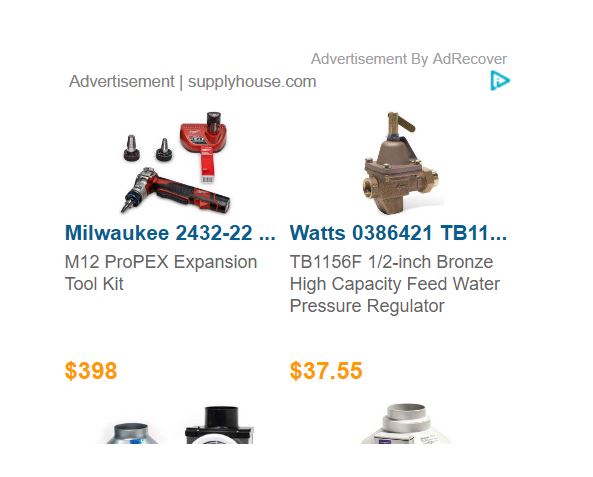 The image below shows the message that “Adblock detected” on the Forbes website. 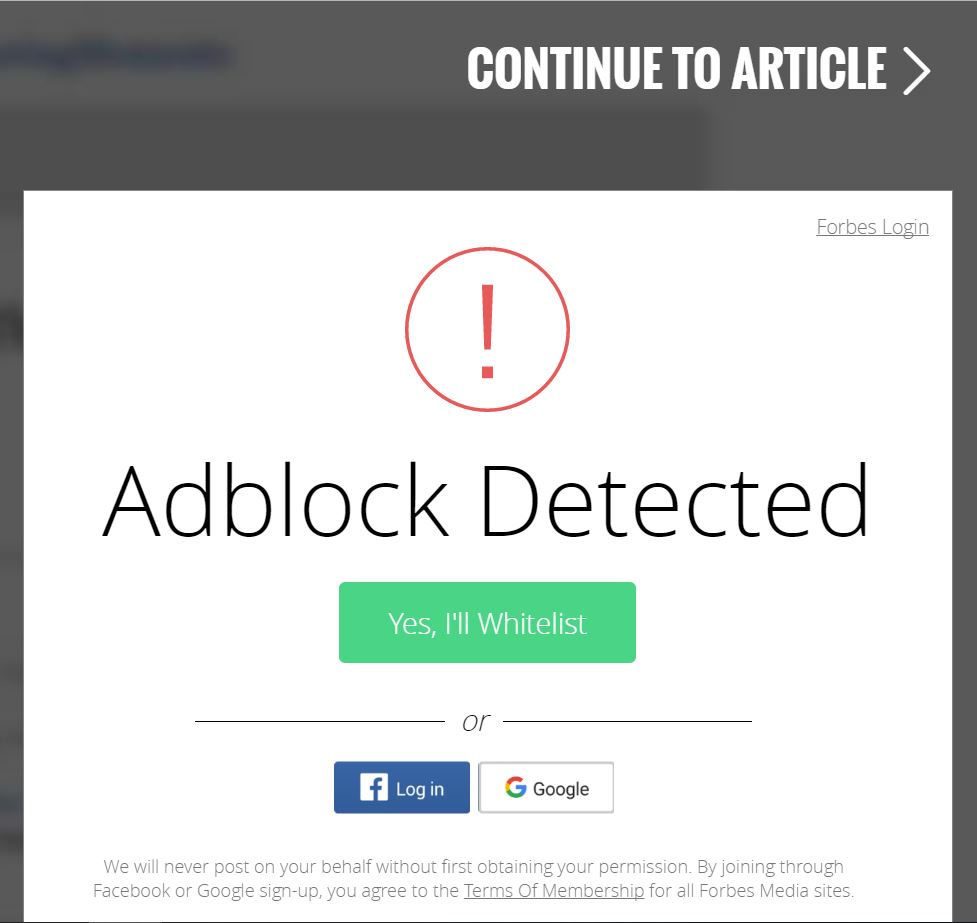 With all negativity surrounding around the Ad Block Plus, there is also some light of hope for the advertisers. Ben Willams, the operations manager at the AdBlock plus says that they are not villains and are only trying to block ads that are irritating or disruptive to the user experience. He also says that the marketer’s solution to the increasing use of ad blocking should be making ads that users accept.  AdBlock plus has also come up with a solution such as Acceptable ads initiative to allow some of the ads. They have set certain guidelines and criteria that check the quality of ads and if they are they acceptable by the users. If such ads fit in the criteria provided by the Ad Block plus, they whitelist them and these ads are then not blocked by the ad blocker. However, they also charge the advertiser a fee to whitelist their ads. According to a report on Business Insider, It is reported that Google, Microsoft, Taboola, and Amazon are paying huge amounts to AdBlock plus to whitelist their ads.

Advertisers can also leverage on the platforms such as Taboola and Outbrain. They provide native ads placements with formats such as “Recommended posts” or “sponsored content”. They provide an alternative to banner ads and other forms of online advertising and are found to drive traffic and increase engagement. They also provide the publishers with the opportunity to monetize their website. However, the problem associated with these platforms is the quality of content that is sponsored.

Ad blocker is definitely having an impact on content creators, advertisers, marketers as well as advertising agencies.  But this has encouraged the advertisers and marketers to create more appealing ad formats that their consumers might accept better.